“The Big flag of Cultural Diversity” was sewn as a participative artistic intervention, made to celebrate the value of cultural diversity while fostering the community. This activity was undertaken within the frame of the conference day “DAY D: Africa as you never seen it before” promoted by the University of Lleida & Foundation Ferreruela Sanfeliu (Lleida, Spain).

By means of a performance (7 days) staged in the street (public space) an invited artist (Tere Recarens) was given the mission (by ZZZ) to activate social participation in Lleida (Spain) to sew a Flag of a minimum of 14 meters wide and 6 meters high. She had only one portable sew machine, even textiles should be collected by means of participation. How was she able to accomplish the mission?

A SYMBOL OF THE UNION OF CULTURES AND THE RESPECT FOR “THE OTHER”.

The action, connected with African tradition of using textiles as means of commemoration and communication served to promote and encourage social debate and participation around the proposed theme: cultural diversity. Citizens were invited to contribute with textiles, fabrics and clothes; also to visit the performance (which has indeed drawn the attention of passerby people) and even invited to collaborate by means of sewing (with the provided machine or bringing their own).

From the collection of textiles to the hanging of the flag, each of the steps needed to accomplish the mission helped to articulate various modes of participation (different degrees). This facilitated the addition and incorporation of a large number of people from diverse profiles among participants. In fact the action created a social space of interaction where people of diverse social backgrounds and cultures (intercultural & intergenerational) had the chance to get to know each other in a direct way. One to one contacts between participants also provided the opportunity to directly break stereotypes and cultural prejudices (personal experience). In fact, the action and the lively debate around it stimulated reflection towards the importance of respect and coexistence as well as contributed to foster the community. A joyful experience that also was a learning one. 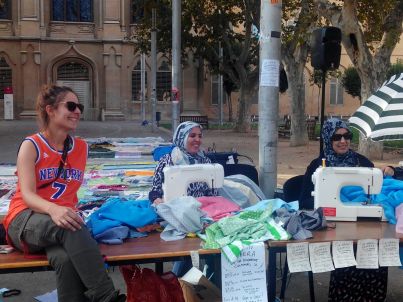 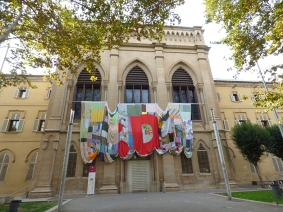 The making of the flag was a “pretext” that allowed a “not forced” exchange, almost accidental, motivated by curiosity or the common interest on the cultural diversity issue. No only “newcomers” joined forces, also local neighbours got very engaged with the initiative, as it was considered as an opportunity to positively celebrate their social landscape. In Lleida more than 140 nationalities live together without many real opportunities for interaction. Even initial spectators ended up adding hands after solely observing for a while. In fact, the accomplishment of the “mission impossible” functioned as the perfect “melting excuse”. In other words, the activity has served as a stimulus to activate the commitment and social involvement. The action included strategies in order to be inclusive and accessible (reduced mobility and special needs).

The effective making of the flag was the result of direct citizen participation. The mission was successfully completed, sewing a 17,50 x 7,40 meters flag in a record time, 56 hours. The flag measures are themselves an indicator of the success of the activity.

Check out the full photo gallery documenting the action under: https://drive.google.com/open?id=0B6IVfZzRQIwTcF9BN3g4akt5TDQ

Summary of the strategic points:

Forecasts and points to consider for similar activities: